Fundamentals of water and aqueous solutions

Water is the liquid of life. Research of the past decades has shown that liquid water is not the passive background against which biology unfolds, but rather an active participant and facilitator of biochemical processes that are responsible for life. Although a water molecule is composed of only one oxygen and two hydrogen atoms, water is a liquid at room temperature (in contrast to other light molecules). Even more remarkable is that solid water is less dense than its liquid form, which is why our earth is inhabitable. These structural singularities are caused by the interaction between water molecules. In the liquid phase each water molecule shares a bit of its electron density with its neighboring molecules via a hydrogen (H) bond, which makes water a unique liquid. Liquid water restructures itself on a femtosecond time scale and an Ångstrom length scale, and these structural changes propagate through the network, influencing the macroscopic properties of water.

We investigate the properties of water and aqueous solutions on multiple lengths scales. We address the molecular scale with atomistic simulations (in collaboration with the COSMO lab of Michele Cerriotti), and spectroscopic measurements. The nanoscopic length scale is investigated with fs elastic second harmonic scattering (fs-ESHS). The macroscopic length scale is investigated with surface tension and viscosity measurements. 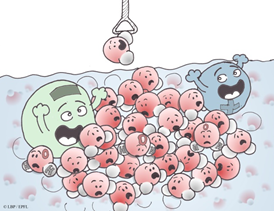 Ions interact with water in many ways, changing dipole orientation, inducing charge transfer, and distorting the hydrogen-bonding network. These effects have been studied in experiments probing the vibrational dynamics, THz time domain response, and dielectric response, as well as in computer simulations. The ions’ influence is shown to be short-range, affecting the structure of water in the first, second and at most the third hydration shell. However, such experiments and simulations are biased towards detecting short-range perturbations.

The interaction of ions with water can be probed with femtoseoncd elastic second harmonic scattering, a background-free method that is biased towards ordering effects on the nanometer length scale. We observe the ions of 21 different electrolytes inducing long-range structural perturbations that are interpreted as a a slight increase in orientational order of water. The measured perturbations appear at ionic concentrations as low as <10 microM (which corresponds to 70 hydration shells, or a distance of 21 nm, or several millions of water molecules per ion). The observed spectroscopic changes depend on the ionic strength of the solution, but are independent of size, polarizability, and charge of the individual ions. These long-range nonspecific effects are also manifested macroscopically in the free energy difference between the interface and the bulk of the electrolyte solutions.

Long-range effects of ions on water: Left: fs-ESHS intensities, relative to that of pure water, of 21 different electrolyte solutions obtained at a scattering angle of 90 degrees (PPP polarization combination). The relative intensities of all electrolyte solutions can be fit with the same equation. The dashed line indicates the concentration of half saturation. fs-ESHS intensities for CCl4 are also plotted (the x-axis should be read here as ‘Concentration (mM)’). Middle: fs-ESHS intensities of NaCl in H2O and D2O (PPP polarization combination) showing an isotope (nuclear quantum effect) of a factor of 6 (the difference in concentration between the dashed lines). Right: Measured surface tension difference for NaCl solutions of H2O (blue data) and D2O (brown data). More info: Science Advances (2016), 2, 4, e1501891, DOI: 10.1126/sciadv.1501891.

Both the macroscopic energy difference and the long-range molecular perturbation of the H-bond network of bulk water display a strikingly different response to the electrolyte (by a factor of ~6) for H2O (light water) and D2O (heavy water). This difference highlights the importance of collective H-bonding interactions, and points to the relevance of nuclear quantum effects.

Specific ion effects are present in various macroscopic properties of bulk aqueous solutions, such as viscosity of electrolyte solutions and solvation free energy of ions. Specific ion effects in aqueous solutions can be detected on the molecular, nanoscopic and macroscopic level. We used fs-ESHS to assess chemical effects on molecular and nanoscopic length scales, and probed changes in the charge distribution around ions as well as structural orientational order of water molecules in the extended hydration shells. The below figure shows fs-ESHS data for > 0.05 M electrolyte solutions with a series of chloride salts (LiCl, NaCl, KCl, CsCl, RbCl, NH4Cl, MgCl2, CaCl2, and CaCl2). Ion specificity is observed in both SSS and PPP polarization combinations, probing both the local electronic anisotropy and the nanoscopic orientational ordering of water. Both observables are influenced more by cations with larger valencies and smaller sizes and follow a direct Hofmeister trend. These ion-induced structural changes in the hydrogen-bond network of water are strongly correlated with the viscosity B-coefficient and the Gibbs free energy of hydration. This connection between the nanoscopic and macroscopic changes provides a possibility to construct a molecular model for specific ion effects in aqueous solutions.

Figure: Measured fs-ESHS intensities of electrolyte solutions. The fs-ESHS intensities of electrolyte solutions for the chloride salt series were measured in SSS (A and B) and PPP (C) polarization combinations. The SH intensity is normalized by the intensity of pure water measured in the same polarization combination. See. Phys. Chem. Chem. Phys. (2017),19, 24678. [PDF]