The Skybotix CoaX is a coaxial birotor model helicopter with embarked sensors, wireless communication and processing power. It can be flown by a pilot using a RC transmitter, but its main feature is the ability to run custom control (autopilot) algorithms onboard. The goal of the project is to achieve basic autonomous flight supervised by a computer.

The Equipment, Controls and Electronics (ECE) section of the EN-STI group at CERN is developing a PWM stepping motor driver able to ensure high positioning repeatability and low Electro Magnetic Interferences (EMI) with driver-to-motor cable lengths of up to 1 Km. This driver is supposed to be used for moving beam intercepting devices (i.e. collimators, scrapers, dump) in the CERN accelerators where high positioning accuracy is required and the high radioactive environment means the drivers must be installed far from the motors.

To improve the motor’s positioning repeatability a controller should be developed to compensate for variations in load torque and thereby prevent lost steps. A Kalman filter based load torque estimator has already been developed. The aim of the project is to design and implement a controller which uses the estimated load torque as feedback in order to adjust the motor’s currents. The project will combine analytical and experimental aspects, which are necessary for the design and analysis of the controller as well as its implementation on a DSP. 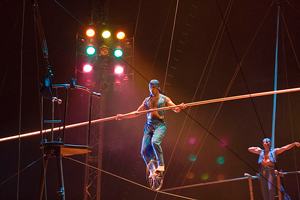 Modeling & control of a self balancing unicycle

Many circuses propose an act where a person rides a unicycle across a wire usually holding a long pole. The pole is there to add stability to the system without which the act becomes virtually impossible due to high instability of the system (unicycle & rider). Adding a pole lovers the center of gravity of the system making it easier to stabilize.

Optimal control for the treatment of diabetics during physical activity

Persons with Type 1 Diabetes have to almost continuously adapt their therapy and lifestyle to account for situations like meal intakes, exercise, illness, medication or stress. Patients using insulin pumps have the possibility to infuse time-varying continuous profiles. This flexibility is not fully exploited by the most commonly used rules to compensate for the above mentioned situations. In this project, we propose to focus on the physical exercise.
It is known that exercise reduces the insulin needs of the patient for a certain period of time. It is also known that this reduction depends on one side on the duration and intensity of the exercise and on the other side on every patient. A model accounting for the effect of physical activity has recently been developed.

The goal of this project is to improve this model and to estimate its parameters using real patient data. The identification should enable the individualization of the method. Eventually, the model coupled to the individual parameters will be used to compute optimal insulin and lifestyle recommendations.

This project is carried out in collaboration with a multinational pharmaceutical company.

Identification and control of a magnetic levitation system

In this project, the model-based controller of a magnetic levitation system is considered. This system is an unstable system which consists of a coil providing the magnetic force, a metallic ball that is to be levitated and a sensor which measures the position of the ball. The force of the magnetic field depends on the distance from the coil. This is the main source of nonlinearity in the system.

The aim is to control the vertical position of the ball by adjusting the magnetic force. The current should be increased until the magnetic force produced is equal to the gravitational force acting on the ball.

To design a model-based controller for this system, first of all, the analytical model of the system should be obtained using physical laws. Next, classical controller design methods should be used to design an initial controller. Then, a linear model of the system is identified in closed-loop operation. Finally, an appropriate model-based controller is designed and applied on the experimental setup which is available in Automatic Control Laboratory of EPFL.

Development of a calibration method for a tracking sensor

To control and stabilize loads that are carried by cranes requires a sensor that can track the motion of the load in space. this is achieved by fitting the load with an LED. The LED is then seen by the sensor and tracked in space. To calibrate such sensors, requires using an array of LED lights with known positions in space that must be read successively. The issue with such methods is finding the correct number of LED’s to use and the algorithm used for treating the data read by the sensor.

This project aims at developing an autonomous calibration method for the accuTrack tracking sensor usedto control the Spider crane system of the laboratoire d’automatique.

Adaptive correction of geometry evolution of a grinding machine

Machine tools need more and more to be precise and to have a reliable production. Based on the design, engineers try to make them as much as possible autonomous and independent from external disturbances.

The goal of this project is to develop a new approach to improve the accuracy of a grinding machine with 6 numerical axes designed for complex tools made of hard materials.This machine has its own measuring system made up of 3 linear absolute encoders. The geometry of this machine is defined by references which can be measured in order to study their evolution. Therefore, they describe the geometrical changes of the machine depending on the internal and external disturbances, mainly due to the temperature variation.

The main objectives of the project are as follows:

The student will use the identification toolbox of Matlab for simulation and other softwares for real-time implementation.

This project is carried out in collaboration with Rollomatic SA in Switzerland.

In recent decades, model-predictive control (MPC) has gained widespread popularity, in both industry and academia, as an applicable and effective type of advanced control that regulates a process in a more eloquent, centralized manner – using a simple model to robustly control the system via repeated optimization. Despite this, a common drawback of many MPC formulations is the somewhat involved mathematics crucial to good performance, with the tuning of some parameters not overly obvious to the typical user.

This project in particular looks at the run-to-run case, where an MPC controller is tuned prior to operation based on simulations and must then be retuned between runs in light of experimental performance that does not match certain expected criteria. While this is often an ad hoc step in practice, results obtained in a previous project have demonstrated that a good strategy to do so automatically may be to cast the problem as a black-box iterative real-time optimization (RTO) problem. The LA is now looking for a student to push the theoretical results obtained so far even further by applying the lab’s RTO methodology to this MPC tuning context.

The aim of this project is to control an active suspension system based on the methods developed at the Laboratory of Electromagnetics and Acoustics of EPFL, for designing shunt loudspeaker for sound absorption and the motional feedback technique for sensor-less control. The platform consists of three floors (plates) on top of each other. The top and the middle plates are connected with two springs and a tunable damper, and also with DC motor which serves as an actuator for active  suspension. The bottom plate represents road and serves as a source of  vibrations of top plate which are measured by accelerometer (acceleration relative to platform ground).

The following steps should be performed during this project:

1) Identify a dynamic model of the system and fine-tune a shunt actuator configuration capable of improving the damping of vibrations with narrow-band time-varying frequency.

2) Design a “virtual accelerometer” device allowing a sensor-less control of vibrations. Tests of the virtual sensing, and assessment of damping performances with actual and virtual sensors will be performed.

The magnetic levitation system considered in this project is nonlinear and open-loop unstable. It consists of a coil providing the magnetic force and a metal ball which is to be levitated. The position of the ball is measured with a distance sensor (laser system).

The force of the magnetic field depends on the distance from the coil in a nonlinear manner, and this is the main source of nonlinearity in the system. The goal of this project is controller design for the problem of tracking the sinusoidal position reference. As existing linear controller design methods will be applied, different approaches will be used for linearization of the nonlinear model (gain-scheduled and LPV model). Existing LabView application should be upgraded so that different approaches considered can be tested in real-time experiments.

Mini 1:43 scale RC cars have just come into their own with the release of the Kyosho dNano cars in 2008, which can drive on a desktop but move at extreme pace. The project will develop the hardware and software for a race track, as well as the controllers enabling them to race automatically.
This project will develop a path-following controller to enable the car to track a pre-defined position/speed trajectory: 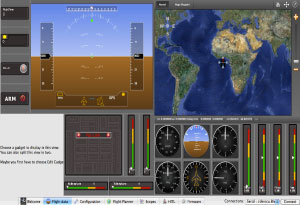 Real-time control of race cars from a vision system

Mini 1:43 scale RC cars have just come into their own with the release of the Kyosho dNano cars in 2008, which can drive on a desktop but move at extreme pace. The project will develop the hardware and software for a race track, as well as the controllers enabling them to race automatically.
This project will develop and implement a hardware platform for closed-loop control of RC cars from a vision system able to track landmarks in a scene:

1. PCB design of a dNano transmitter.
2. Implement an NI card connection.
3. Develop a Labview interface for cars control. The user should be able to add as many cars as he wants to.
4. Identification of the vision system (accuracy,latency).
5. Sensor fusion (Kalman filtering)
6. Develop a control strategy for trajectory tracking (optional).

Mini 1:43 scale RC cars have just come into their own with the release of the Kyosho dNano cars in 2008, which can drive on a desktop but move at extreme pace. The project will develop the hardware and software for a race track, as well as the controllers enabling them to race automatically.
This project will develop an embedded control platform to control from onboard the car:

1. Construct an embedded controller based on a Gumstix computer.
2. Select, evaluate, characterize, and then add the following sensors to the existing structure: accelerometers, gyroscope, compass, laser mice, IR wheel encoders.
3. Implement a method to estimate current position from measurements.
4. Evaluate and characterize solutions to communicate with the main computer, such as Wi-Fi, Bluetooth, or ZigBee.
5. The enthusiastic student will also design an autopilot that guarantees the car go straight while rear wheels are slipping, with full throttle.