For LTI systems, frequency-domain nonparametric models (spectral models) can be obtained by spectral analysis from time-domain data. In this type of models the information is not condensed into a small set of parameters thus avoiding errors of unmodeled dynamics that appear in parametric models. Moreover, identification of spectral models need less a priori knowledge than the parametric identification methods (sampling period, time-delay, model structure, order of polynomials, etc.). On the other hand, several time-domain performance measures can be obtained from the frequency response of the system. The Nyquist stability criterion and model uncertainty can be  represented in the frequency-domain. It is well known that major advances were obtained only when the control problem was regarded as a loop shaping problem in the frequency domain.

In this project a new approach for robust fixed-order H infinity controller design by convex optimization is proposed. Linear time-invariant single-input single-output systems represented by a finite set of complex values in the frequency domain are considered. A sufficient condition for H infinity robust performance control is given by a set of linear or convex constraints with respect to the parameters of a linearly parametrized controller in the Nyquist diagram. Multimodel and frequency-domain uncertainty can be directly considered in the proposed approach by increasing the number of constraints.

For MIMO systems, it is shown that the Generalized Nyquist Stability criterion can be satisfied by a set of convex constraints with respect to the parameters of a multivariable linearly parametrized controller in the Nyquist diagram. Simultaneously, diagonal elements of the controller are tuned to satisfy the desired performances, while the off-diagonal elements decouple the system.

Karimi, Alireza, and Christoph Kammer. “A data-driven approach to robust control of multivariable systems by convex optimization.” to be published in Automatica (2017). 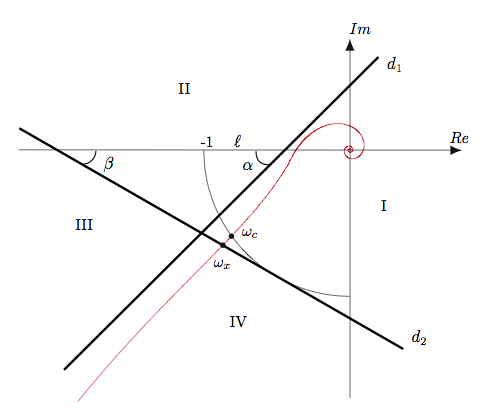 classical robustness indicators, like the gain, phase and modulus margins, as well as the performance indicator, the crossover frequency, are nonlinear functions of the controller parameters. The optimization methods with constraints on these values lead to non-convex optimization problems and cannot be solved efficiently. The idea is to replace the classical robustness indicators by a straight line (d1) in the complex plane that ensures lower bounds on the conventional robustness margins and to approximate the crossover frequency by another straight line (d2). These two lines lead to linear constraints for the optimization problem in which robustness and/or performance are maximized. Each frequency point of the non parametric model of the system multiplied by the controller is simply constrained to be in a certain region determined by these two lines. As the number of constraints is finished, linear programming can solve this optimization problem efficiently. Thus robust controllers can be designed easily by loop shaping in the Nyquist diagram. It should be noted that the multi-model case can also be treated as it simply increases the number of constraints.

Iterative Controller Tuning Based on the Closed-loop Relay Test

In this project, an iterative controller tuning based on a frequency criterion is proposed. The frequency criterion can be defined as the weighted sum of squared errors between the desired and measured gain margin, phase margin and crossover frequency. The method benefits from specific feedback relay tests to determine the gain margin, the phase margin and the crossover frequency of the closed-loop system. The Bode’s integrals are used to approximate the derivatives of amplitude and phase of the plant model with respect to the frequency without any model of the plant. This additional information is employed to estimate the gradient and the Hessian of the frequency criterion in the iterative controller tuning method. Simulation examples and experimental results illustrate the effectiveness and the simplicity of the proposed method to design and tune the controllers.

New nonlinear experiments will be designed to measure directly the modulus margin (the inverse of the infinity norm of the closed-loop sensitivity function). This new information can be used in an iterative robust controller tuning approach.