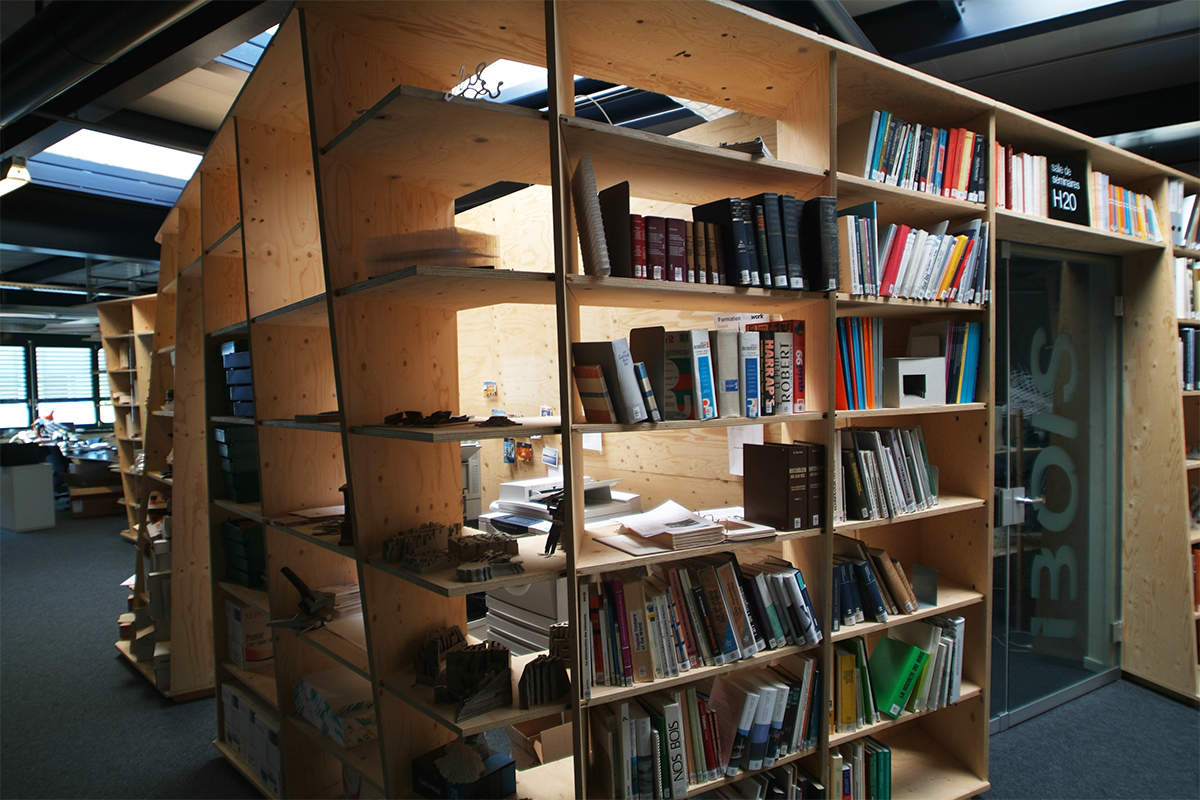 With the appointment of Professor Yves Weinand at the head of the Ibois, a complete remodeling of the offi ces was carried out. The researches established have the characteristic to be the fruit of a close cooperation between the various collaborators. Working groups made of an architect and an engineer, of a mathematician or a computer engineer if necessary, seek the new forms of timber construction.

The volume of the classroom and meeting room is initially a right-angled parallelepiped volume positioned in the center of the space used as «open space». The volume undergoes then the deformations necessary to adapt to the needs and constraints. The thickness of the «wall» becomes a bookshelf which undulates in space. The interior skin separates from the bookshelf to create two smaller spaces, the server and the copy machine corner.

The Choice of Wood and its Surface

Usually packing cases are made out of the wood panels which have been chosen for this project. A wood with a strong grain pattern is chosen to give a strong wood character. By using multilayered panels it is possible to support the weight of the books and to resist the cantiliver of the angles. 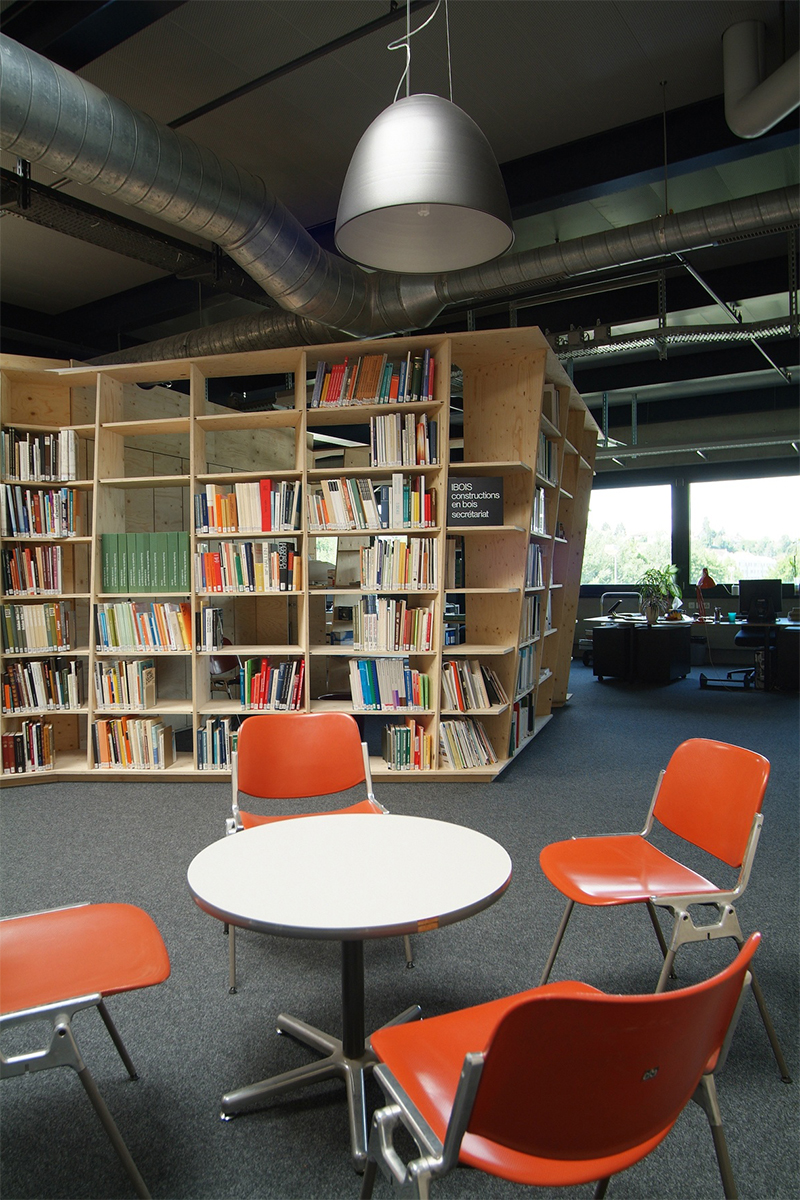 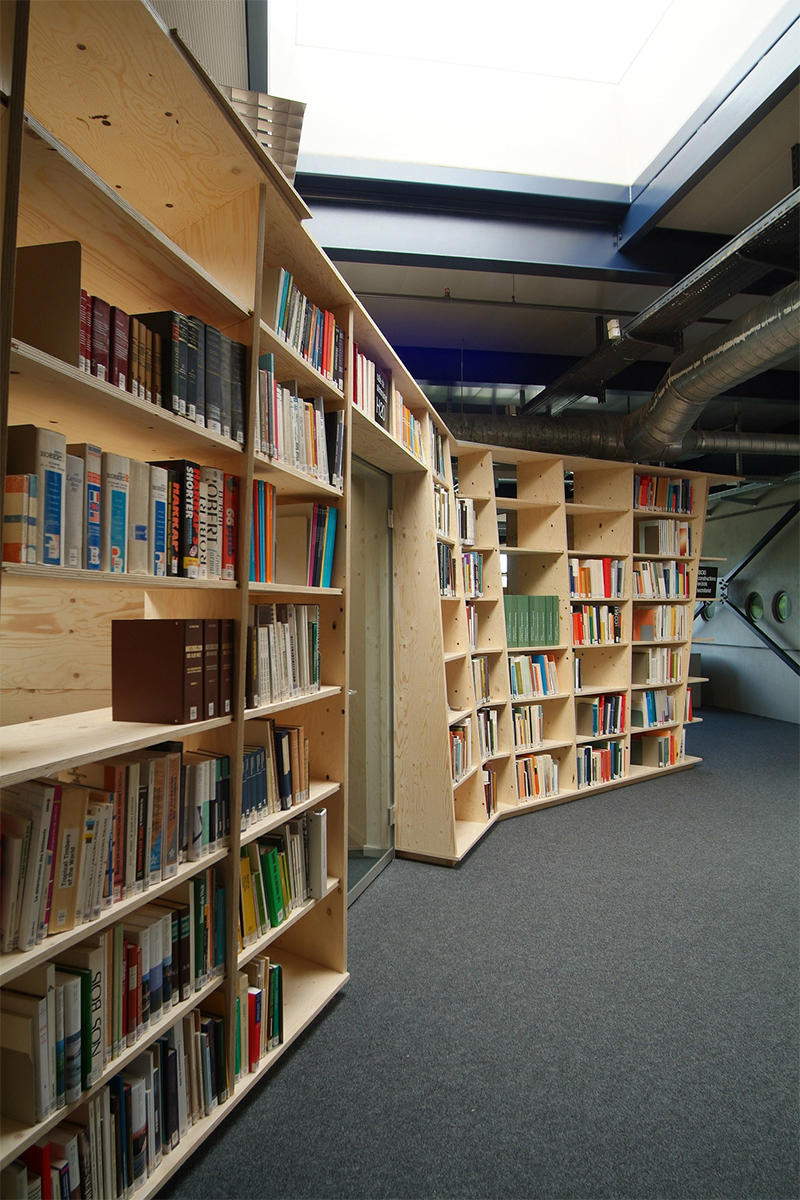 The Evolution of the Form

The project was the occasion to implement the collaboration between engineers and architects. This allowed the control of the form and its structural capacity. The 3d drawings carried out by the architects are transmitted for structural calculation to the engineers. Work in the same space makes it possible to quickly discuss and find solutions by taking in account the needs of each other. To check the shape, the architects build a model at 1/10 scale while the engineers build a detail at 1/1 scale. Following a first series of calculations, the deformation of the angles of the volume is considered too critical. A solution is searched together. The solution found is to swivel on a radial axis the vertical panels. Visually this solution increases the desired dynamical effect. The structure takes fully advantage of the rotation of the vertical elements. It reduces the distance at the angles and creates a bracing of the object which allows a easy assembly (the volume was already braced by its initial form).

More than 600 parts of different shapes and sizes are numbered and engraved by a computerised cutting machine. A huge work which would have been impossible and out of price without the software and current machines. The different panels are cut in three days. The precision of the computerized work allows then a fast assembly. The basic volume – all the wood parts – is assembled in three days also. Follows a series of work where the craftsmen take over again the construction site: plaster work, painting, etc…

The installation of an open space work environnement could seem a retroactive solution. Computers make it possible to connect today the various consultants located far from each other. Here, it is rather a will to open the dialogue between different collaborators which was undertaken. The collaborators realized that the disadvantages of an open space environment were exceeded by the advantages of the proximity. The speed of intervention and the comprehension of the work of others has created not only a great dialogue but also a friendly environment which has a lot to do with the success of the assignements. 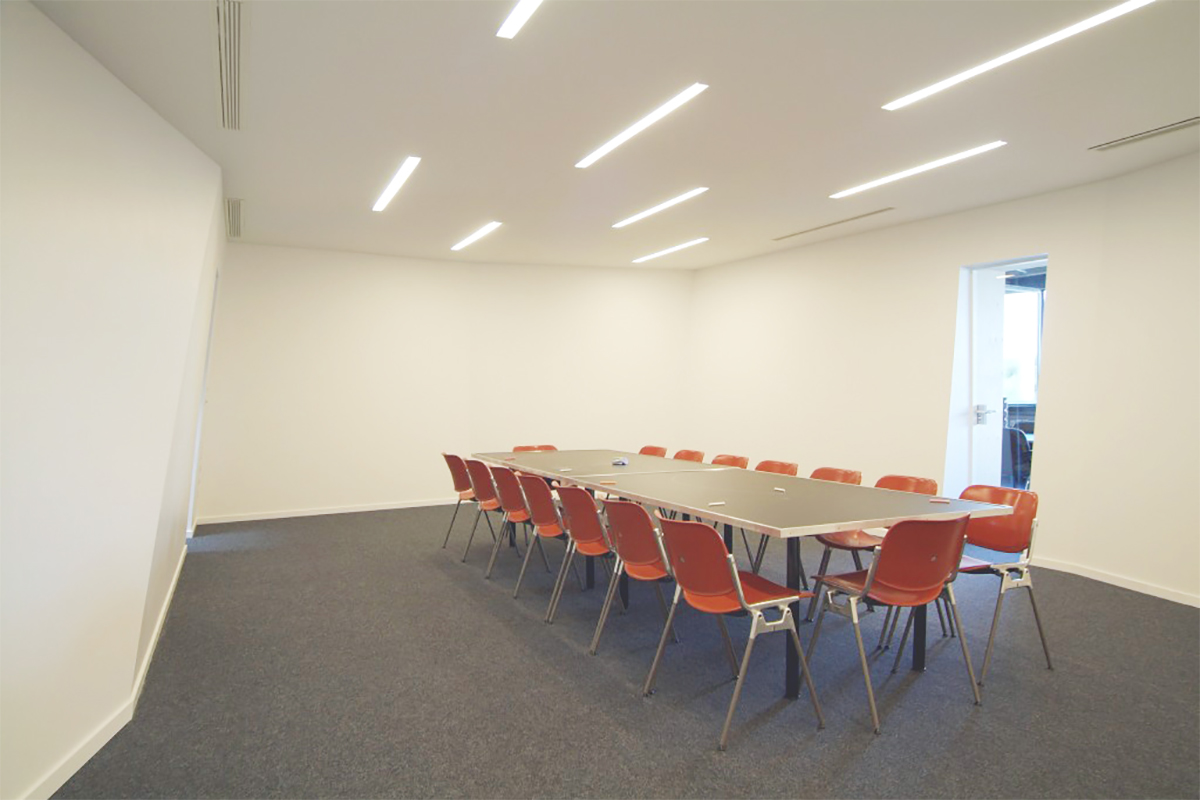