Micro-architectural behavior of traditional disk-based online transaction processing (OLTP) systems has been investigated extensively over the past couple of decades. Results show that traditional OLTP mostly under-utilize the available micro-architectural resources. In-memory OLTP systems, on the other hand, process all the data in mainmemory, and therefore, can omit the buffer pool. In addition, they usually adopt more lightweight concurrency control mechanisms, cache-conscious data structures, and cleaner codebases since they are usually designed from scratch. Hence, we expect significant differences in micro-architectural behavior when running OLTP on platforms optimized for inmemory processing as opposed to disk-based database systems. In particular, we expect that in-memory systems exploit micro architectural features such as instruction and data caches significantly better than disk-based systems.

This research sheds light on the micro-architectural behavior of in-memory database systems by analyzing and contrasting it to the behavior of disk-based systems when running OLTP workloads. The results show that despite all the design changes, in-memory OLTP exhibits very similar microarchitectural behavior to disk-based OLTP systems: more than half of the execution time goes to memory stalls where L1 instruction misses and the long-latency data misses from the last-level cache are the dominant factors in the overall stall time. Even though aggressive compilation optimizations can almost eliminate instruction misses, the reduction in instruction stalls amplifies the impact of last-level cache data misses. As a result, the number of instructions retired per cycle barely reaches one on machines that are able to retire up to four for both traditional disk-based and new generation in-memory OLTP.

OLTP in Wonderland — Where do cache misses come from in major OLTP components?

A Methodology for OLTP Micro-architectural Analysis 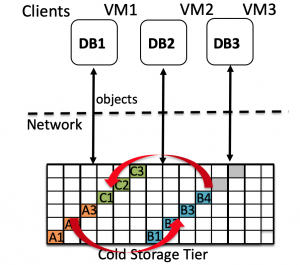 Enterprise databases use storage tiering to lower capital and operational expenses. In such a setting, data waterfalls from an SSD-based high-performance tier when it is “hot” (frequently accessed) to a disk-based capacity tier and finally to a tape-based archival tier when “cold” (rarely accessed). To address the unprecedented growth in the amount of cold data, hardware vendors introduced new devices named Cold Storage Devices (CSD) explicitly targeted at cold data workloads. With access latencies in tens of seconds and cost/GB as low as $0.01/GB/month, CSD provide a middle ground between the low-latency (ms), high-cost, HDD-based capacity tier, and high-latency (min to h), low-cost, tape-based, archival tier.

In this research, we examine the use of CSD as a replacement for both capacity and archival tiers of enterprise databases. While CSD offer major cost savings, current database systems can suffer from severe performance drop when CSD are used as a replacement for HDD due to the mismatch between design assumptions made by the query execution engine and actual storage characteristics of the CSD. We build a CSD-driven query execution framework, called Skipper, that modifies both the database execution engine and CSD scheduling to be able to benefit both from the low cost of CSD without sacrificing its high latency cost. Results show that our implementation of the architecture based on PostgreSQL and OpenStack Swift, is capable of completely masking the high latency overhead of CSD, thereby opening up CSD for wider adoption as a storage tier for cheap data analytics over cold data.