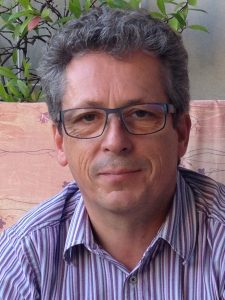 Frédéric Mila was born in Toulouse, France, in 1962.
He got his degree from Ecole Polytechnique (Paris) in 1983, and his PhD from the Université d’Orsay in 1987 for his work on the theory of surface phonons done at the Commissariat à l’Energie Atomique (Saclay).
He then joined T. M. Rice’s group as a post-doc at the ETH-Zürich (1987-89) to work on high temperature cuprate superconductors, in particular on the explanation of NMR experiments.
He continued to work on strongly correlated system as a post-doc in Rutgers University (1989-91), then as a chef de travaux in Neuchâtel.
In 1993, he got a permanent position at CNRS (chargé de recherche de première classe) and joined the Group of Theoretical Physics of the Université Paul Sabatier à Toulouse (France).
In 2000, he was appointed as a Professor of Theoretical Physics at the Université de Lausanne, and since october 2003, he is Professor at the EPFL, leading the chair of Condensed Matter Theory.