EnVision is a computer vision system based on a spiking neural network (SNN) for the Envirobot. The Envirobot was developed at the Biorobotics Laboratory at EPFL Lausanne. It is a snakelike swimming robot with an anguilliform type of locomotion. This project was inspired by a study of the Department of Computational Biology at KTH Royal Institute of Technology in Stockholm which aims to establish a computational model of the behavior based on visual stimuli of a lamprey. The three basic behaviors escape, avoidance and approach were considered in this work. For each of those behaviors, one specific color is used as visual stimuli which triggers a certain behavior when this color is detected. The work to carry out by the Biorobotics Laboratory was firstly the development of a webots based simulation in order to observe the behavior of the lamprey following this computational model. The next goal was the implementation of this simulation on the hardware Envirobot. The present paper describes the hardware aspects which are necessary to enable the integration of EnVision in the Envirobot. 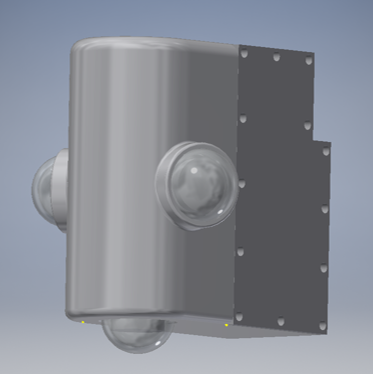