Whether in the scientific or medical field, one requires to work with tools able to switch between a soft, hence adaptive and compliant behaviour to a stiffer one, enhancing precision and controllability. In the surgical field, for instance, an actuator would need to be compliant to its uneven surroundings, capable of adapting to shocks and unequal forces, as well as being stiff enough to perform a rather precise work. In the scope of this bachelor’s semester project, which is incorporated within the framework of a climbing robot as well as mimicking soft paw-pads for the Oncilla robot, we created an element offering a wide range of compliance, going from soft (having an elasticity modulus of 0.03 MPa) to stiff (1.9 MPa) while offering a linear spectrum of intermediate behaviours, and then characterised its stiffness along this range, focusing on its Young’s elasticity modulus E. In order to achieve that, we designed our element as a membrane containing a granular medium and then stiffened it by vacuuming out the air inside at several pressures (from 1000 mbar to 0 mbar,) with a smartphone controlled device including a pump coupled to a pressure sensor. In the end, we conducted static tests in compression with a professional extensometer and were able to observe a rather linear relation between the internal pressure and the E-modulus for a sample with a quite constant cubes’ arrangement, ensuring a continuous compliance throughout the vacuuming range for a fixed shape. However, the modulus being way inferior to that of the same material in its concrete form, future work in this scope would need studying the effect of the stochastic arrangement between the cubes, which seems to play a significant role in the medium’s elasticity, as well as try to conduct the same tests but with a laterally inextensible membrane such as fabric or a metal frame. 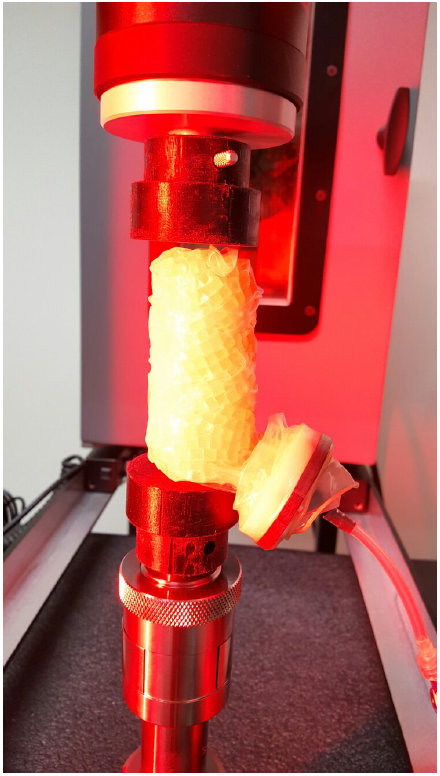