SPACE THROUGH THE UNFOLDING OF DIRECT DEMOCRACY IN SWITZERLAND

In this dissertation, I address the political and moral geography of Swiss federal participatory votes for the period between 1981 and 2014 to re-investigate some of the fundamental questions left open in urban sciences: how and why socio-ethical, moral and political values differ across gradients of urbanity. To do so, I deploy a set of interdisciplinary analyses, and bridge between the epistemological positions, theoretical frameworks and methodologies of axiomatic political geography, political moral psychology, and cognitive and evolutionary anthropology. In this setting, I produce a simple yet powerful conceptual model that ties people’s conceived aspirations, perceived affordances and developed capabilities in order to explain the ideological variations I find across the Swiss territory. In the first study, I investigate the spatial resonance of political cohesion as a socio-ethical manifestation of collective cooperation. I use inferential statistics, geometric data analysis and cartographic mapping and find political behavior aligns with the gradients of social urbanity and the degree of integration of Swiss communes’ residents in the globalization process. In the second study, I turn to the geography of political preferences and unveil the existence of fifteen “moral constituencies” across local communities. To do so, I make the innovative use of a measure of political agreement and disagreement, which I combine to network analysis. I find Swiss local communities split in four ideological components that comprise a set of political clusters. With those results, I offer an alternative explanation to the paradoxical cohesion of Swiss society by pointing out the role of the urban networks in securing national unity. Looking at the evolution of local communities’ political agreement/disagreement, I also show that the Swiss political landscape has undergone a major restructuring over the last thirty years. Ideological clusters went from a highly fragmented and region-based system to a triptych partitioning opposing mostly city dwellers and linguistic minorities to suburbs, and to the country-side. This shift was accompanied with an overall increase in political agreement at the national level. In the third study, I examine the role of moral emotions on communes vote outcomes. I use the theoretical and methodological framework of Moral Foundation Theory and bind vote outcomes to the lexicometric assessment of moral values in the official arguments presented to voters. To do so, I digitally record all Official Vote Leaflets produced by the Swiss Federal Chancellery between 1981 and 2014; translate the Moral Foundation Dictionary into French; and combine both data in a content analysis. Using multiple binomial regression, I find the moral content of the argument predicts part of vote outcomes for certain communes. Finally, I produce a series of moral maps, which I qualitatively access to picture the relationship that prevails between space, ethics and politics. 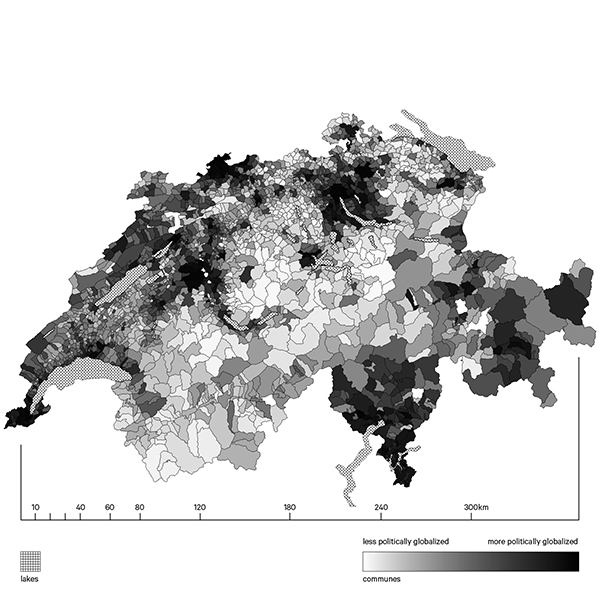 link to the research thesis