This doctoral research addresses the mutually constitutive dynamics between space and collective agency. More specifically, the research analyzes in which way urban space, through its degree of urbanity, enacts forms of collective agency (social movements) through emotions, and how in turn these agencies modify and produce new space. The cases selected for this purpose are the cities of Geneva (1990-2000), Buenos Aires (2000-2010) and Madrid (2010-).

The ubiquitous upsurge of urban protests during this decade, is paralleled by an equally growing proliferation of literature dealing with the city as a scene of conflict and a device for the production of segregation (Donzelot, Touraine, Sevilla, Brenner, Elden, Merrifield, Smith, Harvey, Pattaroni, Sassen) with the implication of biopolitical control (Foucault, Agamben). However, the city also serves as a background to many new movements and social groups seeking to respond to this situation, by producing new spaces and forms of sociality that are fundamentally distanced from those of institutional city production.

Beyond its consideration as a new urban question or as the result of collective effervescence, this research seeks to overcome deterministic approaches to the phenomenon of collective agency and spatial framing. It does so through a combination of analysis of spatial practices, perception of spatial affordances (Gibson 1977) and spatial cognitive appraisal through emotional elicitation (Scherer 2005).

In line with the promising yet largely unexplored Extended Mind thesis (Clark and Chalmers 1998), this research explores the phenomena of extended affectivity as a form of distributed cognition. 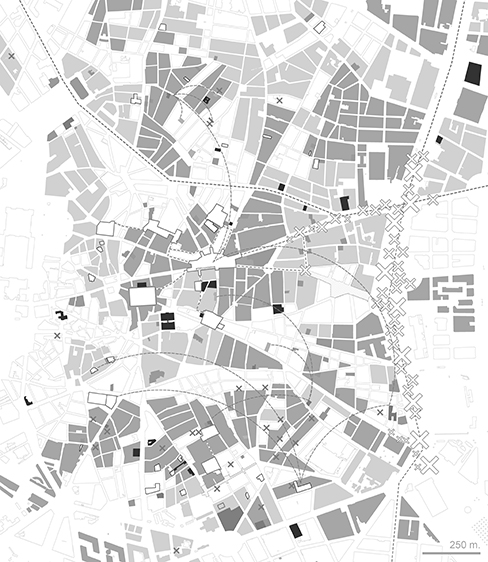 Spatial practices of contention against the background of urban vulnerability. Madrid 2012-2014.

link to the research thesis