ALL ABOUT SPACE VOL.1

22.02.2016 ALICE EPFL is pleased to announce the first volume of ALL ABOUT SPACE, by Dieter Dietz and Daniel Zamarbide (editors), with main texts by Matthias Michel, photographs by Dylan Perrenoud and graphic design by Jonas Voegeli. The book launch @EPFL will be held in 2016.

The four consecutive volumes of the series ALL ABOUT SPACE aim at sharing the “ALICE experience” with the public. It combines fact, fiction and speculation with approaches to work at the ALICE laboratory, focussing on the creative understanding of space as a human condition. In consequence, the first volume extrapolates how space is “invented” in terms of the various cultural practices involved with spatial design. The story is told in text, pictures and graphics. It sets out to capture the arbitrary individual experience and pushes forward into the common invention and comprehension of space, embracing topics like the “history”, the “metaphysics”, or the “politics” of space, the “environmental”, the “virtual” and the “simulative” space, and ends up with exploring the spatial conditions of thought, emotion, fantasy and imagination.

Thus, this ambitious project turns the ALICE emphasis on architecture as part of something bigger than the assembly of isolated objects into an adventurous narrative. The following volumes will be published annually until 2018. 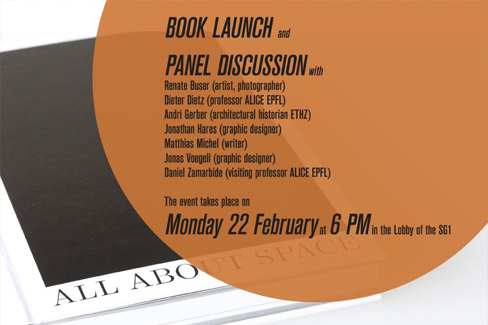