Systems of domination, such as oligarchy and colonialism, produce environments of socio-spatial injustice and economic subordination. Through legal schemes, they expropriate, repress one’s right to develop one’s habitat, proceed to widespread demolition and extraction, scheme gentrification strategies. Their shortsighted, profit-driven planning leaves behind territories. In a word, they reduce the “capability” of the living.

The present research seeks to construct an architectural practice around the capability approach, from the notion of “disposition” and through a genealogical perspective. Capability describes the actual means to achieve one’s purposes, which are not reducible to a market framework, and which exist in relation to entangled and heterogeneous sets of parameters that condition action. Architecture is the milieu and support of capability: it constantly conditions it, all the while being the outcome of a variety of human and more-than-human actions. However, most architectural practices scarcely address the growing inequality of capabilities and the mechanisms of domination that underlie them. Therefore, how could an architectural practice around capability help mitigate such mechanisms and inequalities?

This perspective builds from Keller Easterling’s notion of “disposition”, which theorizes an extended practice of architecture around scripting and observing “not only what the form is, but also what it is doing and how it will play”. Here, the form is not merely material, but rather pertains to heterogeneous domains, such as governance rationales and rules. These rules can be physical and material, as well as institutional: laws, ordinances, codes, scripts, protocols… They condition both human habitus and the possibilities of architectural form in the long run, and thus are very powerful tools. Hence, an architectural approach to capability needs to be dispositional. It is only as such that it can address and re-organise the multiple dimensions that condition architecture, understood as the support of our everyday practices and means of existence.

To construct this approach, the thesis consists in a spatial genealogy of situations where paradigmatic mechanisms of domination exist through specific governmentalities, and considerably reduce capabilities. Here, a genealogy is to be understood as a process through which the dispositions immanent to such situations are decoded. Then, the research advances a projective analysis of existing and planned dispositional practices based on appropriations of laws, norms, and codes that can extend capabilities. These are inclusive frameworks and protocols that can activate the potentials of the “déjà-là” (already-there) through architectural projects, as can be observed in the work of Patrick Bouchain, Atelier Bow-Wow, Charlotte Malterre-Barthes, Aristide Antonas and others. From there, finally, the thesis will advance a series of architectural and legal instruments and strategies giving potential for a more inclusive and self-determined urban production. 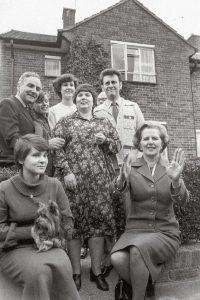 1980 : through Margaret Thatcher’s Right to Buy, the Parker Family is one of the first to buy what was a welfare-state council house built after the war. The Right to Buy replaces the public right to affordable housing, and the framework which made possible most of British architectural modernism. It is part of a narrative presenting privatisation as “enfranchising the many in the economic life of the nation”, and of a policy of state disengagement. / Press Association Images