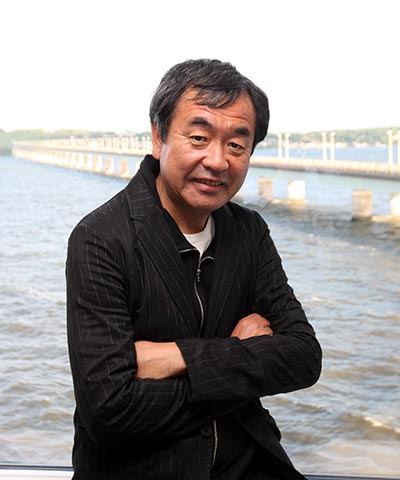 Kengo Kuma, born in 1954, studied architecture at theUniversity of Tokyo before heading to Columbia Universityin New York. He founded the Spatial Design Studioin 1987 and Kengo Kuma & Associates (KKAA) in1990. That firm now employs over 100 people in Tokyoand more than 20 in Paris. Kuma taught at ColumbiaUniversity, the University of Illinois at Urbana-Champaignand Keio University, where he also earned a PhDin architecture in 2008. He is currently a professor at theUniversity of Tokyo’s Graduate School of Architecturewhere he oversees research projects in the fields of architecture,urban planning and design in his own laboratory, the Kuma Lab.

Kuma aims to revive Japanese architectural traditions and reinterpret them for the 21st century. He takes a scientific approach to materials, using them to instill grace and lightness in his designs. He can make stone seem just as airy as wood or glass. “The place is a result of nature and time,” he says. “I think my architecture is some kind of frame of nature. With it, we can experience nature more deeply and more intimately. Transparency is a characteristic of Japanese architecture; I try to use light and natural materials to get a new kind of transparency.”

His work includes several museums in Japan and around the world, including the Nezu Museum in Tokyo, the Besançon Art Center and the Regional Contemporary Art Fund (FRAC) in Marseille, the latter two of which opened in 2013. The ArtLab building (project name: Under One Roof) is his first project in Switzerland.

Kuma is one of two vice chairmen, alongside David Chipperfield, of the architecture-design selection panel for the second phase of the Plateforme 10 museum complex in Lausanne.

→ Technical details of the ArtLab building