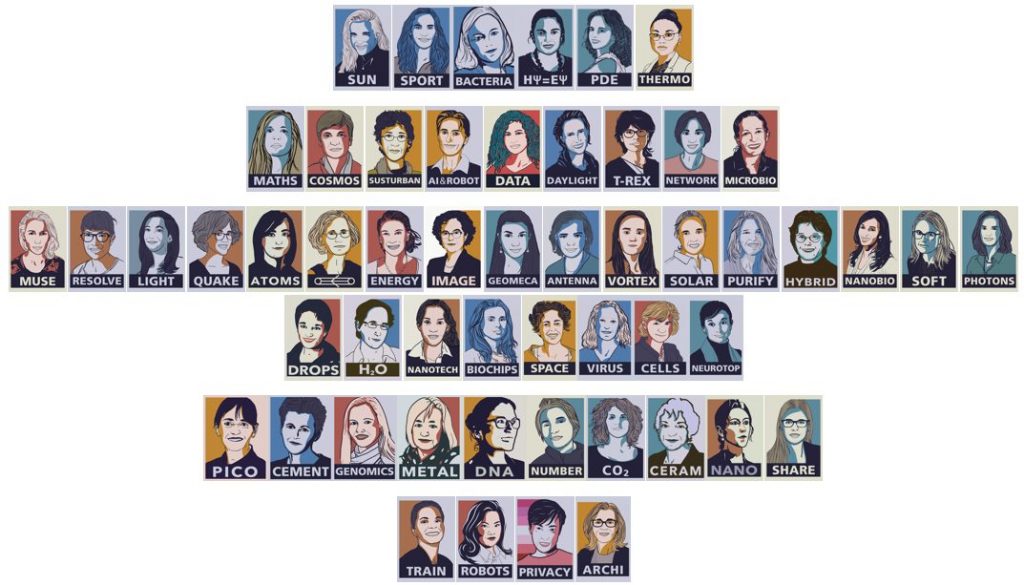 Female Leadership in Science portraits 50 women professors at EPFL, at the occasion of EPFL’s 50th anniversary. The portraits will be displayed on two main buildings on the EPFL Campus from 14 September until 30 November 2019.

The chosen visual approach is based on the aesthetics of political posters of the 1960s. These were often made using two or three color silkscreen printings, while the written message was reduced to a simple word to increase the impact. The same approach has also been very successful reused about 10 years ago during the campaign of US President Barack Obama.

With these portraits, EPFL highlights today’s requirement to strengthen the place of women in society and, more particularly, in science and engineering.

In the portraits shown here, the word “HOPE” from the Obama campaign is replaced by a mathematical formula, a scientific concept or an object of study. Because the future of research and innovation will be done with more women. “Yes, we can!”

See all the portraits here or download applications for SmartPhone or I-Phone.

A proposal from the Equal Opportunities Office, inspired by an original artistic project sponsored by the Institut des Matériaux, supported by NCCR-Marvel
Portraits and films by Alban Kakulya
Application by Maryam Zakani
Subtitles and translation by Léa Kieser, Elodie Adam and Antoine Zürcher
This project is supported by the swissuniversities P7 programme “Equal opportunities and university development 2017-20”.